The big surprise for me was Ratmansky’s Firebird, which I hadn’t yet seen or read very much about. A lot is different from the Fokine version (we have a corps de ballet of firebirds, for example). Ivan is no longer a tsarevich, although the bottom of his suit jacket is reminiscent of the bell-shaped skirt worn in the original.

I did like that Ratmansky ramped up the drama of the love story between Ivan and the maiden, and gave the maiden an actual personality – sassy, awkward, endearing.  This answered the criticism that Alexandre Benois wrote of the 1910 version in his memoir: “The worst of it is that the hero of the ballet, Ivan Tsarevitch […], and the Beautiful Tsarevna are always remote from the audience. One does not believe in them and therefore it is impossible to suffer with them.” 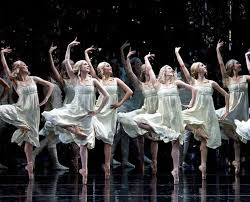 I think we were not supposed to be somewhere geographically or culturally specific, and so I found myself with strange associations – lipstick vent birch trees, Daenerys Targaryen (“mother of dragons”) headdresses for the freed maidens, Kaschei as The Joker. But relieving the sorcerer of the parade of minions from Fokine’s version, which I have always found somewhat tedious, focuses the action on Kaschei’s power over this group of maidens. (It’s a little bit Swan Lake-ish in that regard.) He makes the maidens worship him; he usurps their will. He controls their movements, he keeps them in total ignorance.

Call me crazy, but that sounds a lot like Putin's hold over Russia. By the time we got to the pas de quatre between Kaschei, Ivan, the Firebird, and the Maiden, I was off and running on an interpretation of Ratmansky’s Firebird as a wish fulfillment fantasy for the future of Russia, with the maidens as the Russian people duped by state run media and the Firebird as this messianic symbol of the underlying power and magic of the “folk.” Ha! Probably not what was intended, but I’m telling you, there’s a case to be made here! (Zara Abdulleva, a Moscow-based writer, on the post- Soviet era: "The only myth that continues to fire the imagination is the one about Russia's mysterious, messianic destiny.")

Curious about: What was the reason for the multiple firebirds? 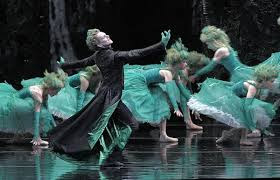 And where exactly is Ivan when the ballet starts (it looks like he’s in an insane asylum – high white walls, small black door)? (I wrote down “Mats Ek Giselle” in my notes.) What are we supposed to make of him – who is he, where is he, and what happened to cause him to lose contact with his lady love?

I felt that the ballet dragged in a few places, but what an imaginative, provoking, and warmly humorous take on the original libretto. Incidentally, I learned that the “smoke” that Kaschei breathes onto Ivan comes from a capsule of cocoa powder the dancer playing Kaschei puts in his mouth. Apparently this was Ratmansky’s idea.

Also reminded of how incredibly difficult his choreography can be. (No problem for our Firebird, Isabella Boylston.) If I am not mistaken one of her diagonals is a souped-up variation on the arabesque into pirouette combo from Le Corsaire’s “odalisques” pas de trois (third variation). Yowser. There’s an extra developpe front thrown in there and I cannot imagine how she pulled it off.

And briefly: I only saw Symposium once, and I wish I could see it again and again. The civility, fraternity, and conviviality of Ratmansky’s group seemed all the more poignant with the terrible shootings ripping our country apart right now.  The whole idea of rational discussion about a passionate topic (love) with everyone listening and respecting each other… It was a delight and a relief to dwell in the world created on stage for a while. Ratmansky emphasizes our common humanity. (And I again wondered if Ratmansky’s finds his most honest and complex voice in choreographing for men...something I continue to think about.)

Posted by Carrie Gaiser Casey at 8:55 PM No comments: