Just got back from a quick trip to New York to see ABT at the Koch theater. (Which I still can’t get over, the new name…and the fact that ABT is dancing there, in Balanchine’s theater; it’s wonderful and strange.)

I saw the premiere of Her Notes, Jessica Lang’s new ballet, sandwiched between Tharp’s The Brahms-Haydn Variations and Millepied’s Daphnis and Chloe, on Friday night. 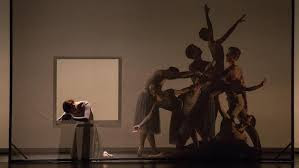 Lang held her own, and her more introspective ballet offered the variety that Daphnis and Chloe was lacking. And while Tharp’s piece shows her formalist genius for shifting patterns, a sort of kaleidoscopic mathematics on stage, it was Lang’s choreographic idiosyncrasy that captured me – asymmetry, a little something unexpected, perhaps even disconnected; quick shifts from the 19th century to the 21st, from Sylphides to Serenade to … to what? That was the underlying question of the ballet for me, like what as women in ballet do we do with the social and aesthetic holdovers from the 19th century.

To me, “Her Notes” examines a transformation of consciousness, that of a woman who is supposed to be a muse, but instead decides she must be a creator. Partly through its choice of composer, but also in its focus on a single female character, Lang’s ballet signals its preoccupation with the female authorial voice; the piece is set to music by Fanny Mendelssohn Hensel, the sister of composer Felix Mendelssohn. Fanny Hensel composed over 400 pieces of music, but as a woman she was discouraged from publishing these works. It’s hard not to imagine that the lead woman, Gillian Murphy, was not some avatar of Mendelssohn-Hensler in the ballet.

Two women (played by the serene Devon Teuscher and Stephanie Williams) appear to shadow the female lead and her partner Marcelo Gomes through the ballet. I thought they were like younger or older versions of her, or her interior or reflective self. They return at the end of the ballet to lead a reflective Postlude. Other sections of the ballet are more episodic, in keeping with the music’s status as a kind of musical travel diary that Fanny Mendelssohn Hensel kept over one year’s time. At moments I waited for Lang to connect the brilliant use of the set in the opening and closing images more concretely with the action. (A moveable gray square, with a smaller square cut out of it, appears as a house, a window, a ceiling, a jail; at first I thought this was going to be the ballet version of The Yellow Wallpaper.) But the ballet negotiates a fine line between the abstract and the narrative, and perhaps we are left deliberately to connect our own dots. Bottom line: I’d like to see it again.

I saw Ratmansky’s Serenade after Plato’s Symposium twice on Saturday at the matinee and evening performance. I’ve seen it three times now, and each time it reveals more. And this is a ballet where a change of cast can overturn what you thought the ballet was about the last time you saw it. But that’s a good thing – each dancer shows us a new shading of the movements, evoking different emotional resonances and enriching the whole.

When I watch this ballet, I am struck by my overwhelming desire to be a part of the idealized social world of  Ratmansky’s Symposium. Philosophical explorations of the meaning of love, and truthful emotional expressions and experiences, are met with openness, with friendship, and with humor by the group. It’s deeply moving to see a model of human society where vulnerabilities can be expressed and received. (Symposium as support group? A ballet rendering of an ideal AA meeting?) Multiple viewpoints, different temperaments – they all come together, and they are all accepted, in the Symposium. Human beings are held in their full complexity, from their foibles to their moments of insight and greatness. And all of it is rendered delicately, lovingly, richly, by Ratmansky’s choreography. What an ideal for us to hold on to at this time when public discourse has reached a new low.