Alexei Ratmansky’s new ballet for American Ballet Theatre, Whipped Cream, is sure to be a big hit. Just when you think the pop surrealist costumes and sets by artist Mark Ryden couldn’t get more over the top, Ryden raises you one with an explosion of colorful, playful, plush kitsch. The setting of a Viennese pastry shop, with its dancing delicacies, seems to have fired the imagination of the choreographer; at one point a corps de ballet of whipped cream enters the stage via slide (a playful update on La Bayadere’s Kingdom of the Shades?), and form peaks and valleys of poufy, billowy cream “whipped” about by an unseen force.

The ballet opens outside of a church, where children are celebrating their first communion, including our protagonist “The Boy” (danced brilliantly at the premiere by Danil Simkin). A pink carriage pulled by a life-sized My Little Pony plushie, and an attendant with the first of four enormous heads in the ballet, brings the children to a confectioners’ shop. There, The Boy overindulges in whipped cream and has to be taken to the hospital. Out of jars labeled “tea” “coffee” “cocoa” and “sugar” emerges Princess Tea Flower (Stella Abrera), Prince Coffee (David Hallberg, back from injury), Prince Cocoa (Joseph Gorak) and Don Zucchero (Blaine Hoven). Prince Coffee ultimately chases away the other two suitors, winning the heart of the capricious Princess Tea Flower. Battalions of marzipans, sugar plums, and gingerbread men perform military maneuvers with chocolate pie shields and candy cane lances. Ratmansky gives Princess Tea Flower and her attendants some devilishly tricky choreography, but Stella Abrera tosses it off with a winningly arch manner. 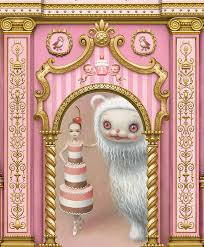 The second act opens in a hospital ward, with a brigade of nurses dancing with oxygen container size syringes. The doctor, with the largest constructed head of the evening, menaces just by his presence, taking The Boy’s blood pressure as a creepy moving eye on the backdrop observes the proceedings. Luckily, a new Princess arrives – Princess Praline (Sarah Lane) – who rescues The Boy and introduces him to her entourage. This includes a truly fantastic number of creatures, including a white fluffy “snow yak,” with enormous eyes and eyelashes, a kawaii creature of the north. Sarah Lane looked absolutely ravishing as Princess Praline – doe eyed and gracious, while maintaining an unshakable aplomb in everything she did.

Meanwhile, back at the hospital, a trio of alcoholic beverages gets the doctor and nurses drunk. Catherine Hurlin (Mademoiselle Marianne Chartreuse), Duncan Lyle (Ladislov Slivovitz) and Roman Zhurbin (Boris Wutki) are outstanding in this trio. The finale of the ballet is a dizzy, whirling affair, in a newly configured land of the sweets. It’s like the town Swanhilda lives in in Coppelia, but gone wild in pink and with lots of stuffed animal creatures. (And Abraham Lincoln watching from one of the town’s windows – apparently Ryden likes to include him in many of his compositions.) The townspeople toss The Boy in the air like the scene in Don Quixote with Sancho Panza. This is the perfect role for Danil Simkin – he IS the kid in the candy store, with that kind of energy, tamed only by a perfect fifth position. Some kind of Father Sweet crowns The Boy (now clad in sparkly gold) at the end, and it turns out he can eat as much whipped cream as he likes in this new town. The program notes state that The Boy lives permanently there now. It’s kind of like he’s died and gone to heaven. At the very least, he’s escaped the creepy panopticon of the hospital, with its needles, bedpans, and brigade of Nurse Ratchets. It’s poignantly escapist.

Whipped Cream offers a complete surrealist vision that is wholly self-contained, never once questioning its own bizarreness. It’s an endearing quality. However this freedom to be nonsensical worked against the ballet at times. It had a parade of costumes feel to it, with random characters that pop out of nowhere. The “divertissement” portion of the ballet happens a bit too early, in the first act. (After a short prologue at the church and in the confectionery shop, The Boy disappears completely from the scene.) It’s a bit like if Nutcracker started with the Kingdom of the Sweets.

Whipped Cream also left me wondering whether the ballet would reveal something more substantive over time. Perhaps it doesn’t need to, of course. But it is somewhat jarring to remember that this is the same choreographer who gave us the Shostakovich Trilogy. (Which also speaks to his range as a choreographer, certainly.) What I felt was missing in Whipped Cream – and which perhaps may become clearer after the seeing the ballet several more times - were the subtle ironic touches that (for example) saved Bright Stream from being merely an exercise in Stalinist kitsch. Some of my least favorite Ratmansky tendencies were evident: sentimental cuteness, predictable boy-girl interactions and sub-plots, and what felt like, and literally was narratively, a simple catapulting over the darker currents of surrealism introduced earlier in act 2. Instead of something uncanny, you get something big eyed and impossibly adorable – a creature who demands nothing from you. I suppose this is the “pop” part of “pop surrealism,” but to me it lacks the subtle bite I’ve come to expect from Ratmansky’s ballets. Whipped Cream was magical and transporting, but not exactly in the way I had hoped for.
Posted by Carrie Gaiser Casey at 2:26 PM 1 comment: