I'm doing some research on Justin Peck's In the Countenance of Kings for a lecture I am giving in August on contemporary ballet vocabulary. I'll be using Peck's ballet next to excerpts from Sleeping Beauty as a kind of case study. The music for Peck's ballet is from Sufjan Stevens' score "The BQE". (Or, for non-New Yorkers, like me, the Brooklyn Queens Expressway.) I don't know if anyone noticed this, but the film that Stevens made to accompany the score has some bearing on the ballet. There are three hula hoop dancers in the film named "Botanica," "Quantus," and "Electress" - the same fanciful names given the female leads in the ballet, and also the three initials from "BQE." Some costume details are similar for these characters between Stevens' film and the ballet. 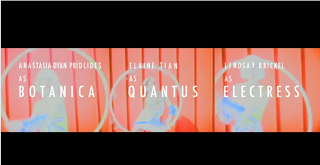 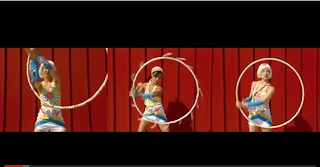 It's worth checking out the film on youtube. Some of its visual effects show up in the ballet's choreography, like how the cars merge together and form amoeba like groups. The organization of the highway, how everything is both orderly and chaotic at the same time, with cars changing lanes, on and off ramps, etc., captures the way Peck's formations group logically but in no way strictly geometrically.

I love the film, and it's given me a different way to look at the choreography. Highly recommend.
Posted by Carrie Gaiser Casey at 1:45 PM No comments: